Cats and boxes – our DIY projects

It is a well-known fact that cats love boxes. My cats are no different and will choose to nap on cardboard over fluffy blankets any time. So naturally most boxes that get into this house won't leave right away. Some of them get modified more than others. Here is some of our DIY cat project made from cardboard boxes.

Do it yourself cardboard houses for cats

Most often a plain box will be interesting enough, but it can be even more fun for the cats if you cut some doors and windows. You can also put boxes on top of each other and create play areas that way. All you need are some cardboard boxes, a knife and some tape. If they get tired of the box you can make even more changes on it or move it to a new location. Usually that will spark the interest again.

This simple box is one of my first cardboard box projects. It simply has a door and a window and the rest is just drawn on. I called it the summer house and the cats loved it even though it was quite small. They loved to sit inside it and on top of it. Unfortunately the roof didn't always hold their weight, but it was part of the fun. Eventually I gave the summer house to one of the neighbours rabbits. It had some fun with it too. You can also see the summer house in the top photo of this post.

I cut a box out as a tower and taped it to a bigger box with two exits and some random wholes a paw could fit through. Made exits on the side and bottom, so they could go from one floor to the other. Now they had a playcastle!

The tank was one of my bigger projects. The barrel is simply an empty roll of gift wrapping and the rest is just cardboard and tape. I decorated it with camouflage tape. There wasn't much room inside it for two adult cats, so mostly they just sat on top of it. So I ended up giving it away to a foster mom who had kittens. 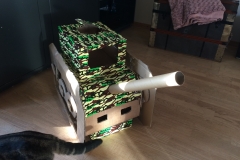 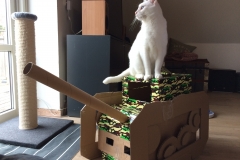 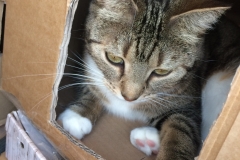 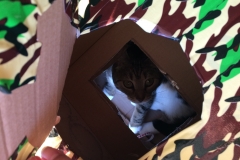 Well more like a tiger cave, but whatever. Sometimes a few lines with a marker can make a big difference. Not to the cats maybe, but it makes it a little more fun for the humans to look at. This is just a box with one entrance, but Ronja used it a lot to sit and to nap in. It was placed on another box (the same box that used to have a tower), so she had a good view over the living room. No surprises coming from behind her either, so I'm sure it felt safe. Also she could stick her paw down into the bottom box, which she seemed to enjoy.

I cant take credit for the idea behind this one, cause I found it on Instagram. It doesn't really need an explanation, but the guide on how to make the fish can be found here.

We have spent a lot of time playing with feathers and wands in this house and the cats have enjoyed it a lot. Victor also used to take naps inside of it and they can also sit on top of it, because of the flat and sturdy roof made from another box. It has a lot of scratch marks today and is no longer in perfect condition, but we'll hang on to it for a bit longer, cause it's a solid box. Check out the slideshow. 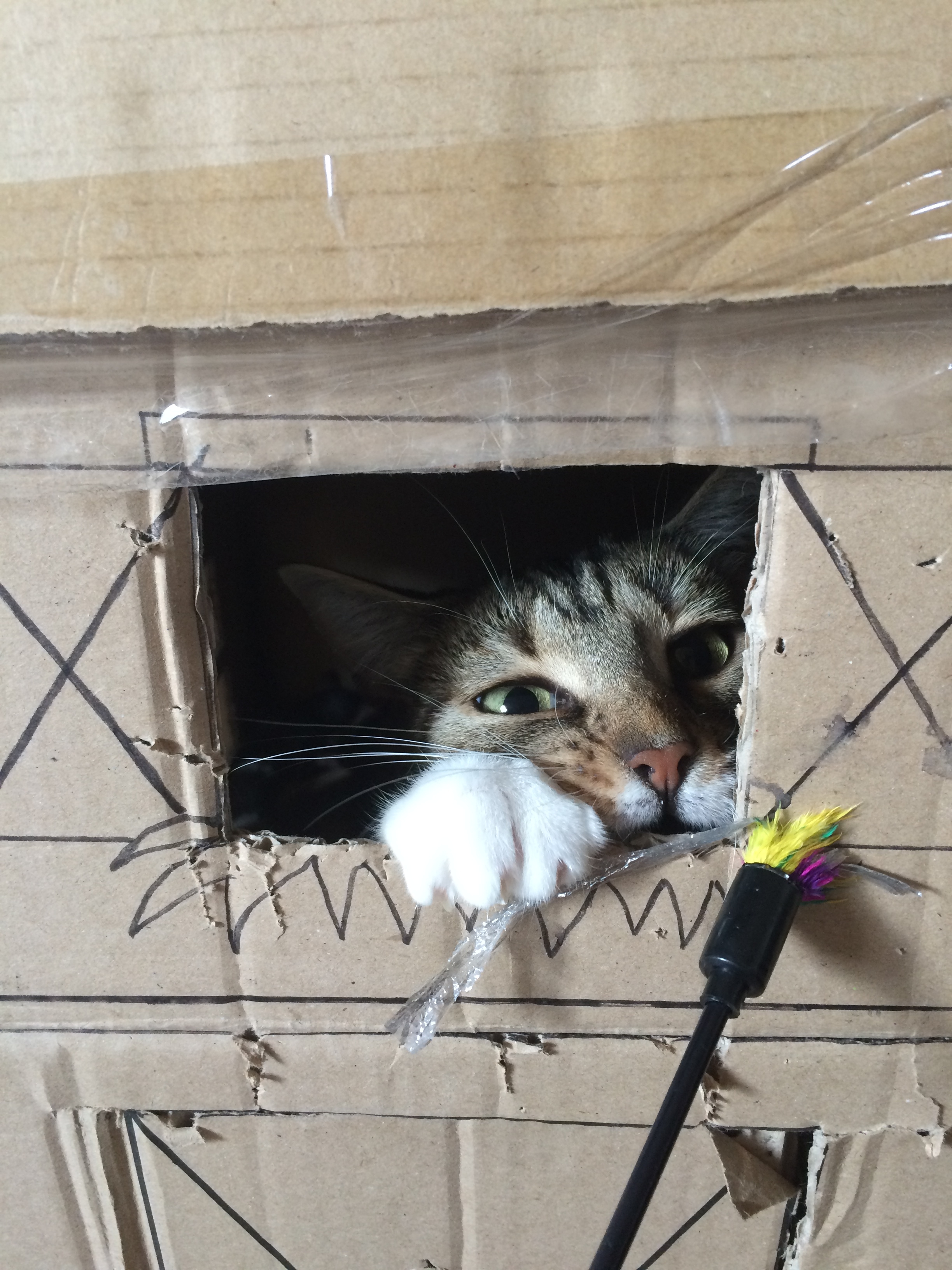 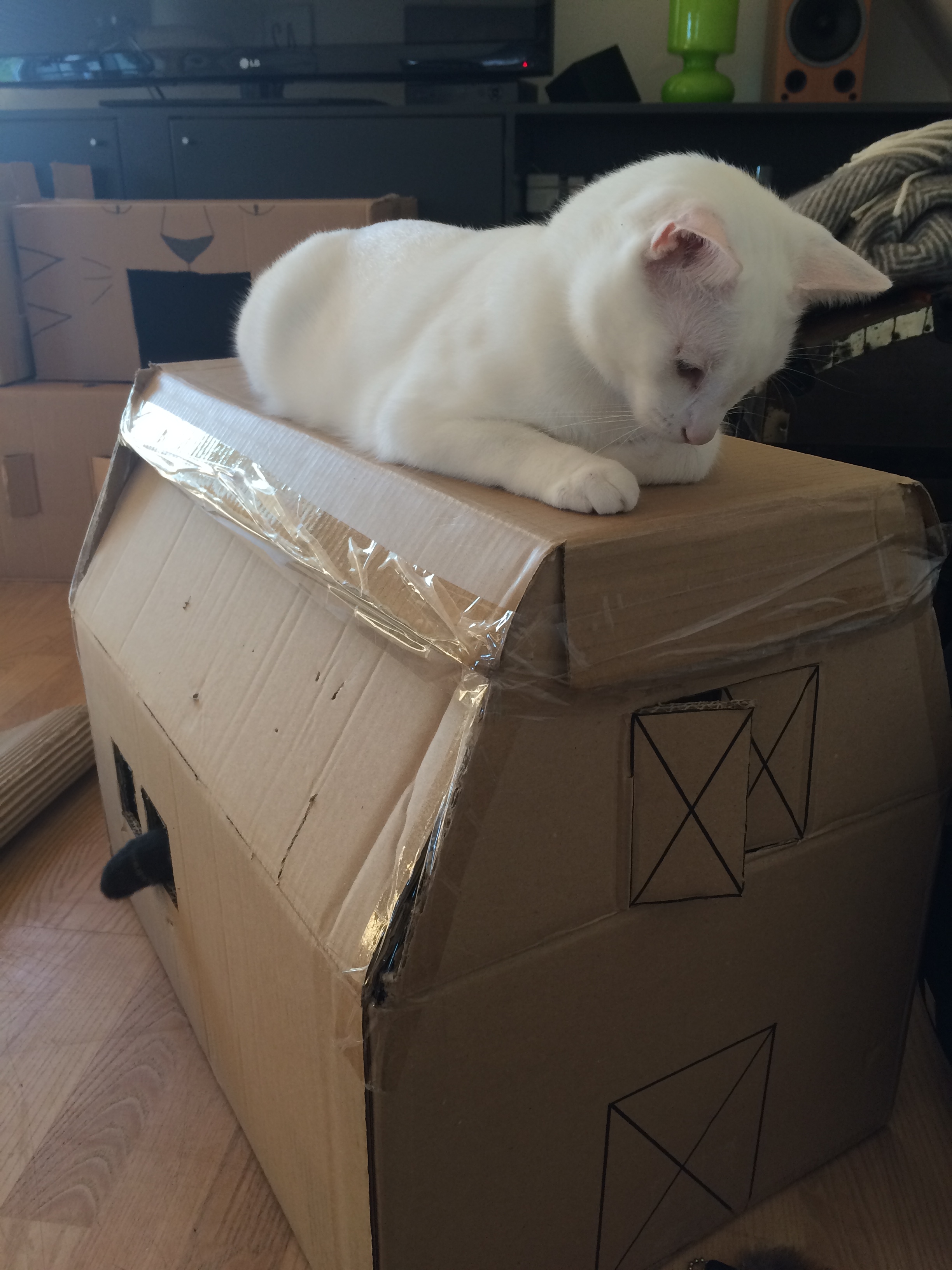 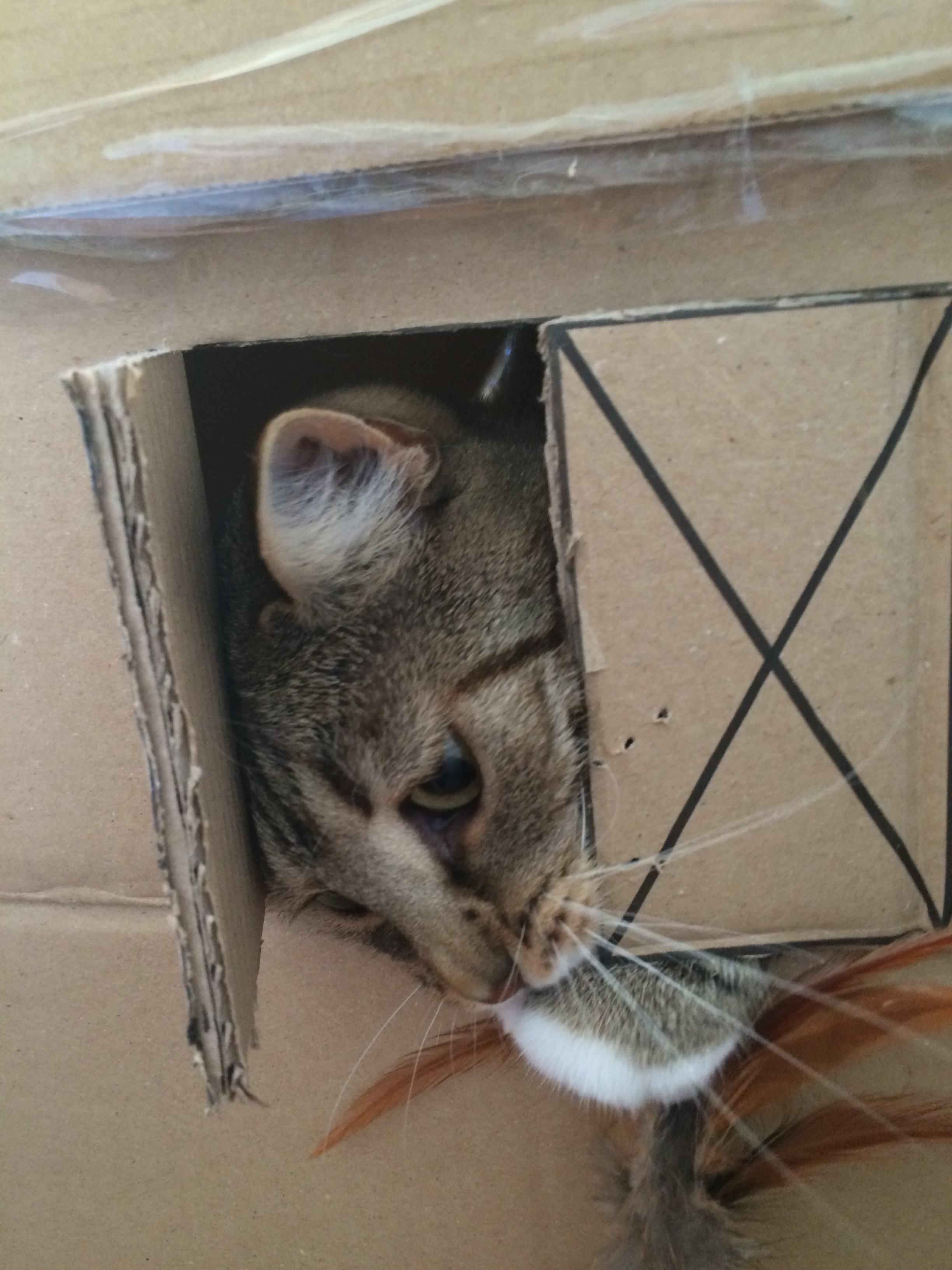 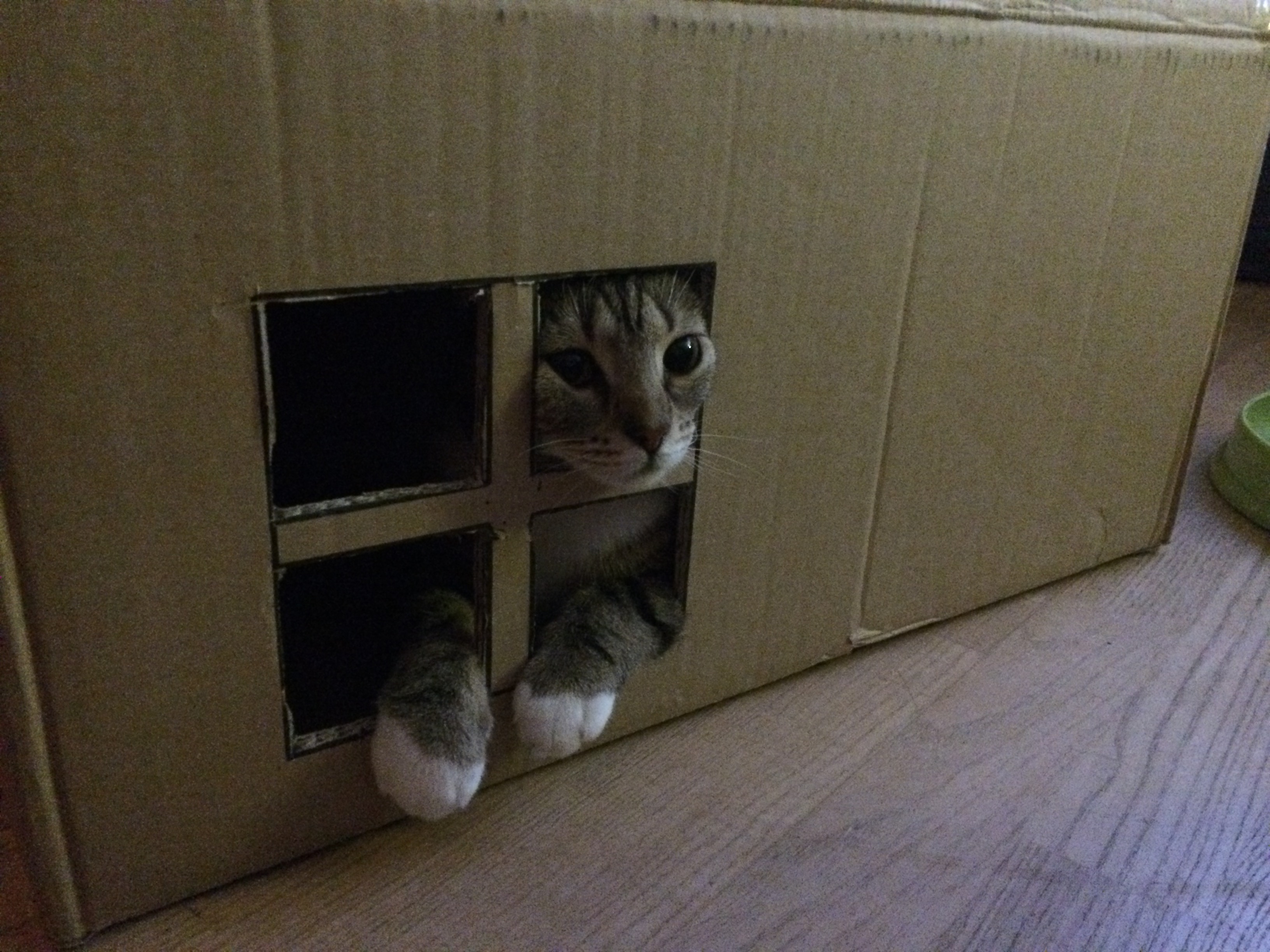 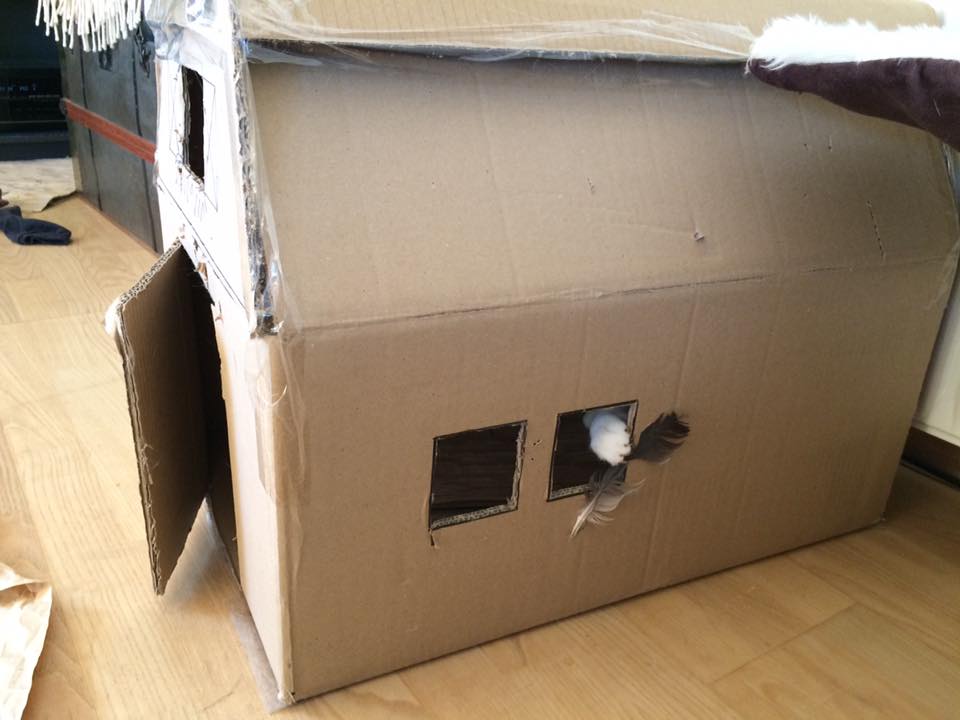 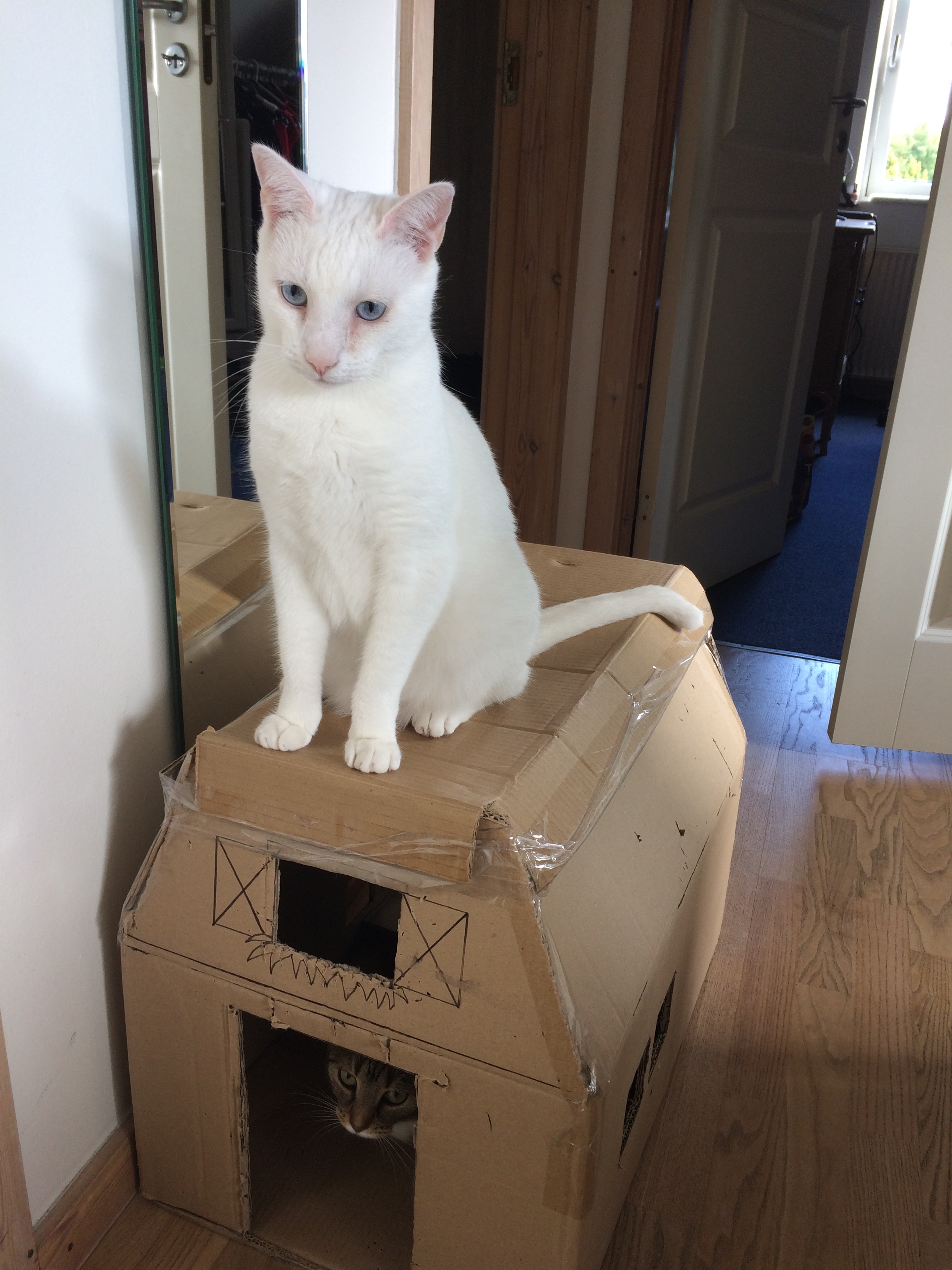 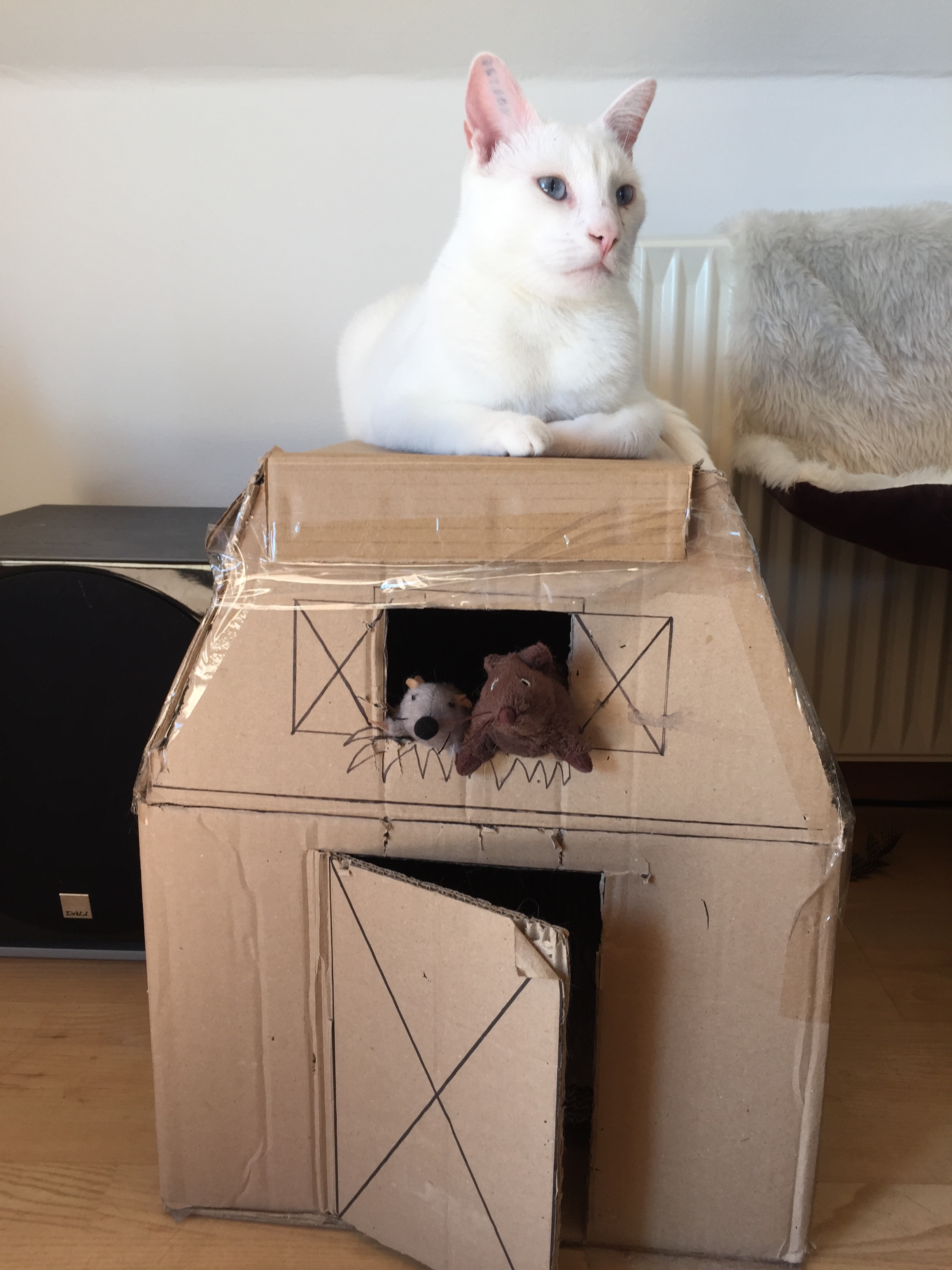 This is basically a Holiday edition of the barn since it's made from the same type of boxes. It is just taped together and can easily be taken down and saved for next year when the season is over. More details on the gingerbread house and other DIY Christmas cardboard projects for cats here.

In this box I hung up toys and put toys inside as well for a small activity area.

These were just some of the countless boxes that we have had in our home. I suspect that cardboard will continue to take up a big part of our living room, as long as we have indoor cats.

View all posts by: Humom

When food is within proximity.

How to keep your cat away from your puzzle 🧩