Early February we went for an annual check up and vaccines. Ronja and Victor are indoor cats who does not have direct contact with other cats or eat raw meat like mice. Therefore they are not in immediate danger of getting infected with diseases. However, I have contact with cats that could carry something infectious. This is because I have two TNR's (fixed ferals that I feed) and I also volunteer at a cat shelter, where we get all kinds of cats in that are not checked. Also I walk Ronja on a leash outside, so to be safe I always get them vaccines plus an annual checkup.

Preparing to get out the door

Since Victor is terrified of vets, we tried giving him a relaxing pill at home on the day of the vet appointment. I didn’t think it would make him groggy, but it definitely did! He was dragging his behind and kept tipping over. Definitely high as a kite! I felt bad for him, but it turned out to be a good thing with the pill, as you will see in the next video. Next time we will try with just half a pill though.

At the vets office

Wen went to a new vet instead of our regular this time. Normally Victor won’t go out of his box at the vet. He will just try to make himself as small as possible and growl if we get close. But because of the pill, he walked right out of the carrier himself! He even let the clinic assistant and the vet touch and lift him. This doesn’t even happen with company at home, so it’s huge for Victor. Look what a good boy he was.

We found a mouse on a stick he liked to get him on the scale that said 5,2 kg. Sadly our success ended here and Victor got more anxious. He lashed out at Ronja, bit me and hissed at the vet. Because Victor seemed to be in good health at the time and had a very thorough examination 6 months earlier, we decided to skip the health check and only do the vaccination. We needed the dreaded cage to get the needle in, but the staff managed to do it more peaceful, than we are used to. And he didn’t wee on the floor out of fear like he usually do.

So It didn’t go as well as we could have hoped for, but still much better than we are used to. The vet really took her time with him. So I’m very happy I tried a new vet who is very understanding with Victor.

Ronja was in her cat carrier for the car ride, but once we arrived, I let her walk in on her leash. The clinic assistant wasn’t used to seeing a cat walk in on a leash like that!

Ronja was calm as ever and spend a lot of time looking out the window, while I talked to the vet. Ronja had been having a bad tummy for weeks and started to sneeze a few days before the vet visit. She had the exact same symptoms in July/August the year before and it could be connected to her bad teeth. We already knew that Ronja had to have more teeth removed because of her gum disease. We decided to postpone the vaccination for a few weeks, because she was already feeling a bit under the weather. The vet kept Ronja for her dental surgery and she removed two teeth.

When Victor and I got back home, he was still a bit woozy from the relaxing pill. We stayed in the bedroom for a bit where he couldn't hurt himself by falling over and he spend the time watching birdies from the window. He later settled down in the radiator bed in the living room and got some much needed rest.

I picked up Ronja about 4 hours later and she was very sleepy still from the anesthetics. Even so, and with newly dental surgery, she went straight for the food cabinet as always. Good ol' Ronja. She was unusually quite though. The rest of the evening she could hardly keep her eyes opened and just wanted to sit in catdad's lap.

You might think that this is the point were everything gets easier. Everybody is safe back home and just need some rest to get better again. However, this is where a very stressful period for us all start. Because of Victor's anxiety this sort of thing affects him very much and makes him act out.

When Victor woke up and saw that Ronja was back, he walked over to her slowly and started carefully smelling her neck. The smell of the vet made him insecure and he hissed (almost screamed!) at her and lashed out. She was still so sedated that she hardly flinched. This would happen every time he got near her, so for the rest of the evening we had to watch over them as soon as Victor was up. Cause she couldn't protect herself. Poor babies being so stressed out. Please note that I did the thing where you try and mix their scents by touching one after another. I did that a lot, to make her blend in better, but it didn't seem to make a difference. Luckily they both slept the most of the evening away. 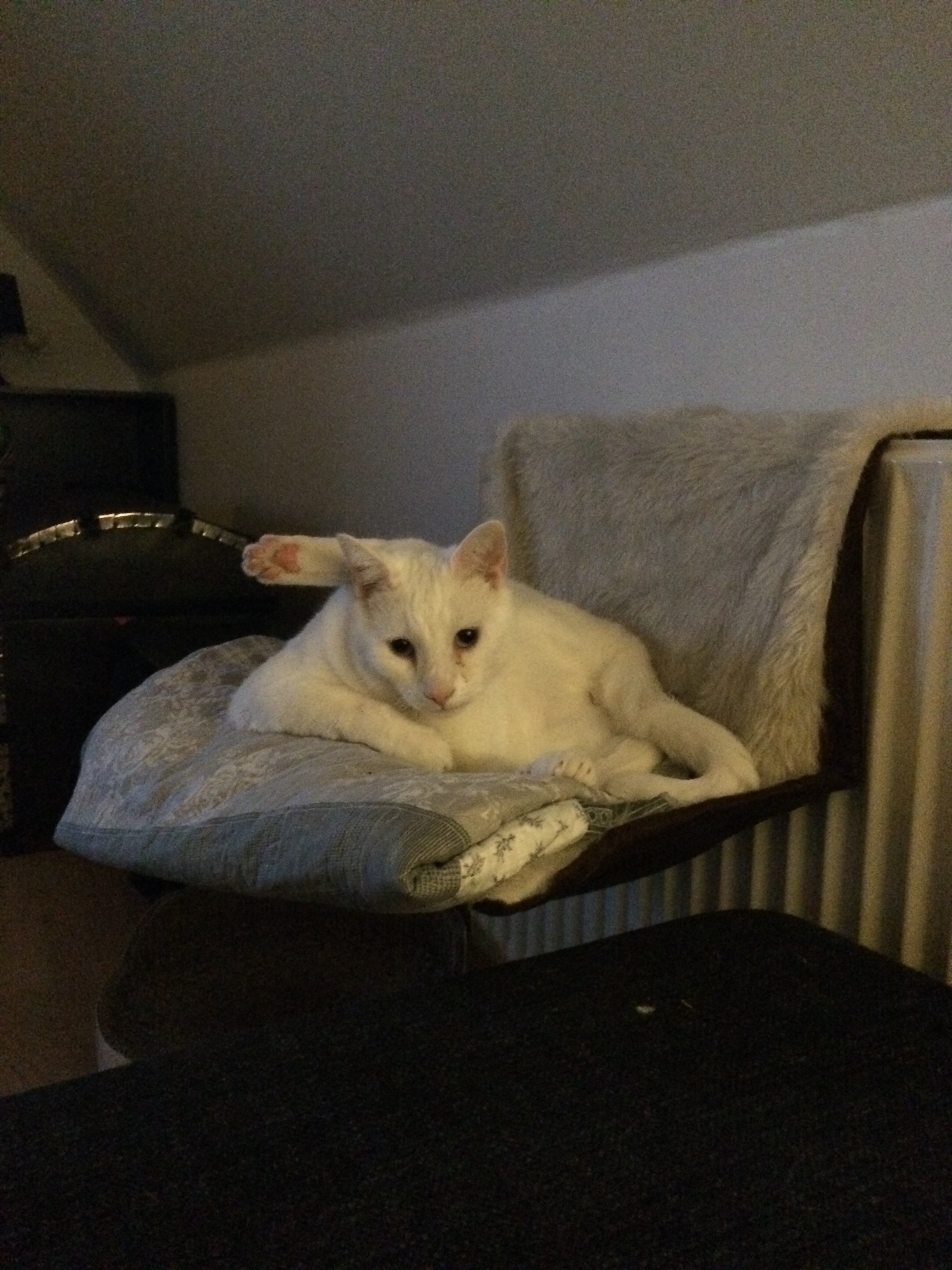 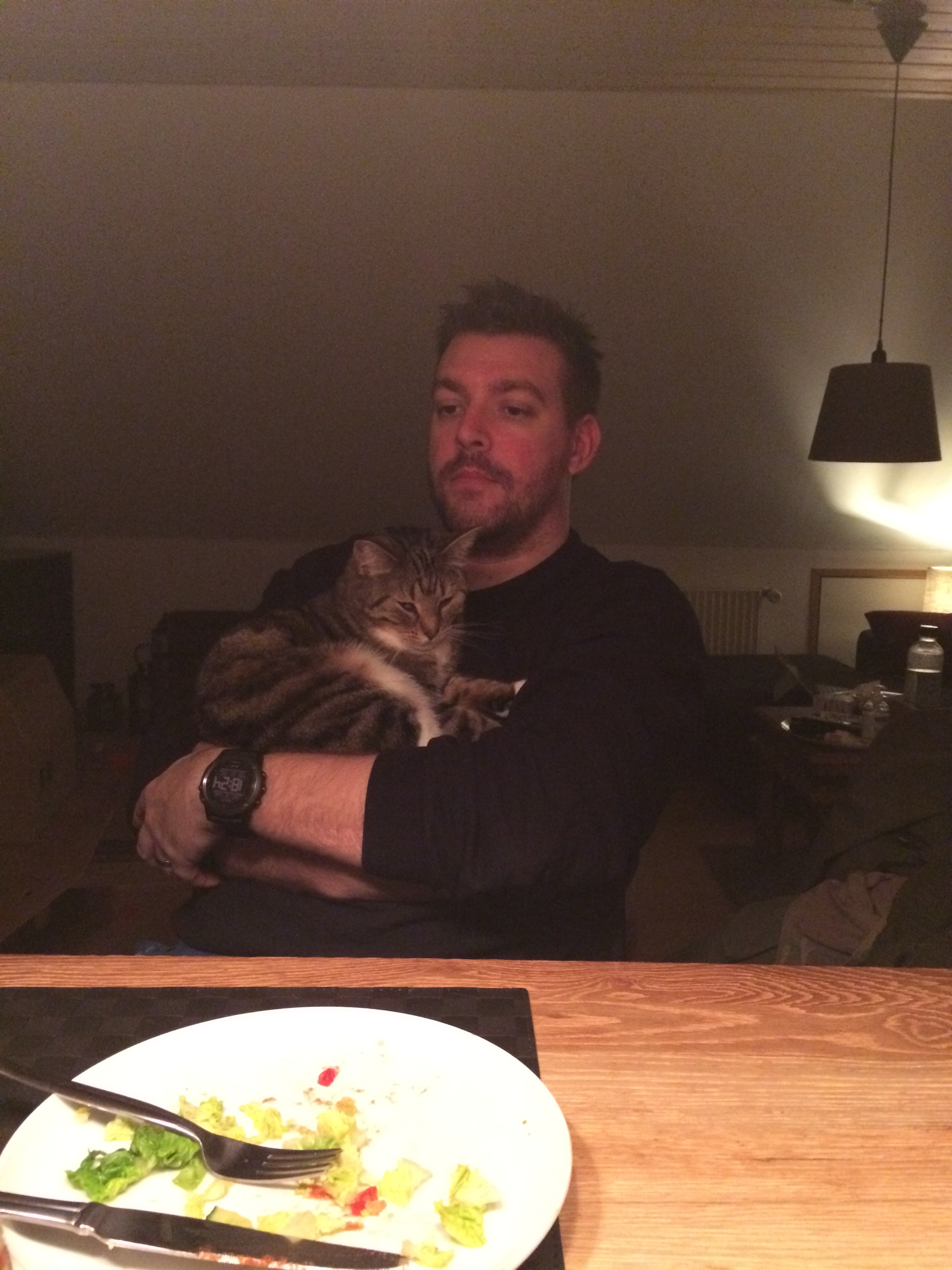 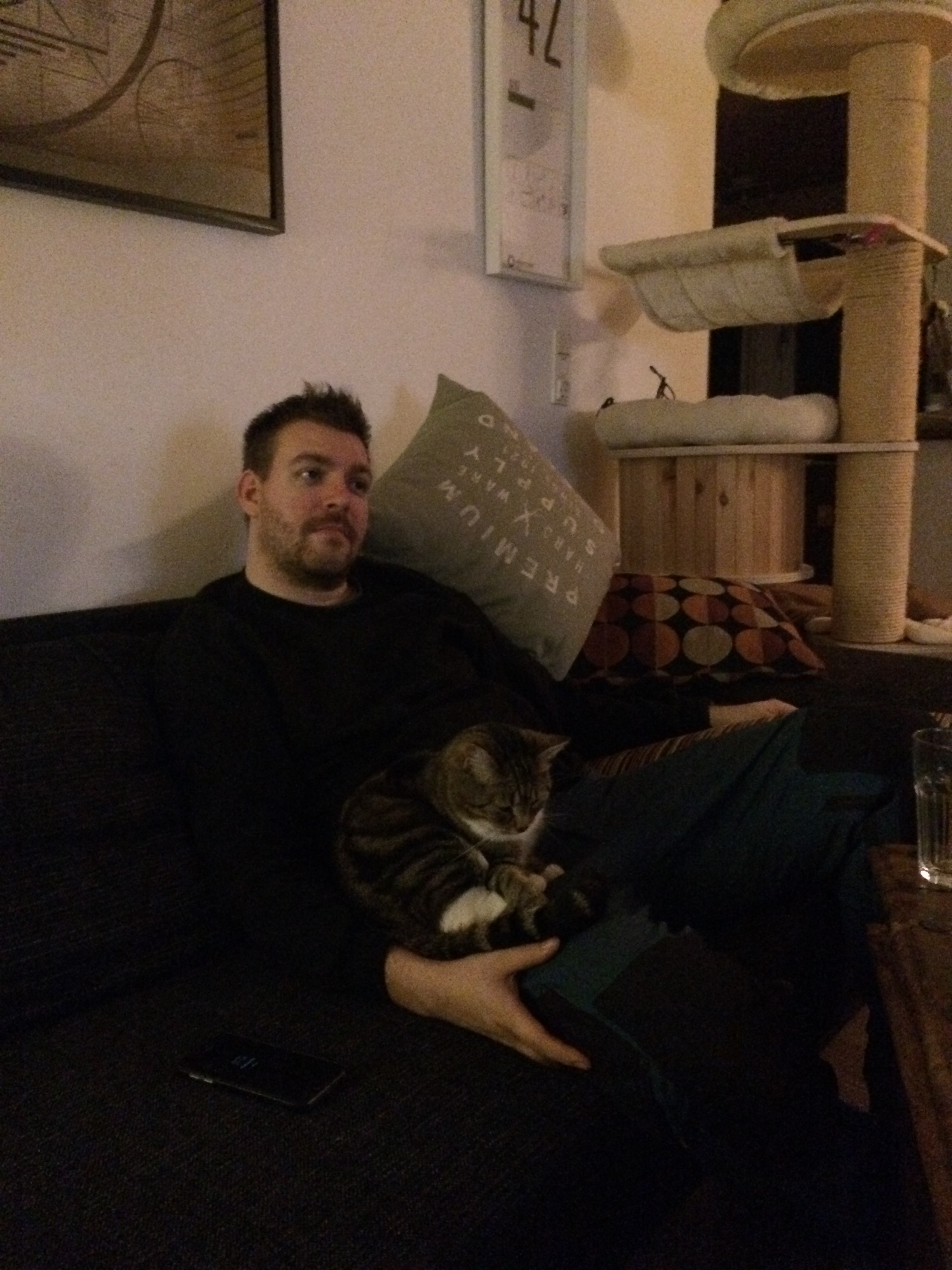 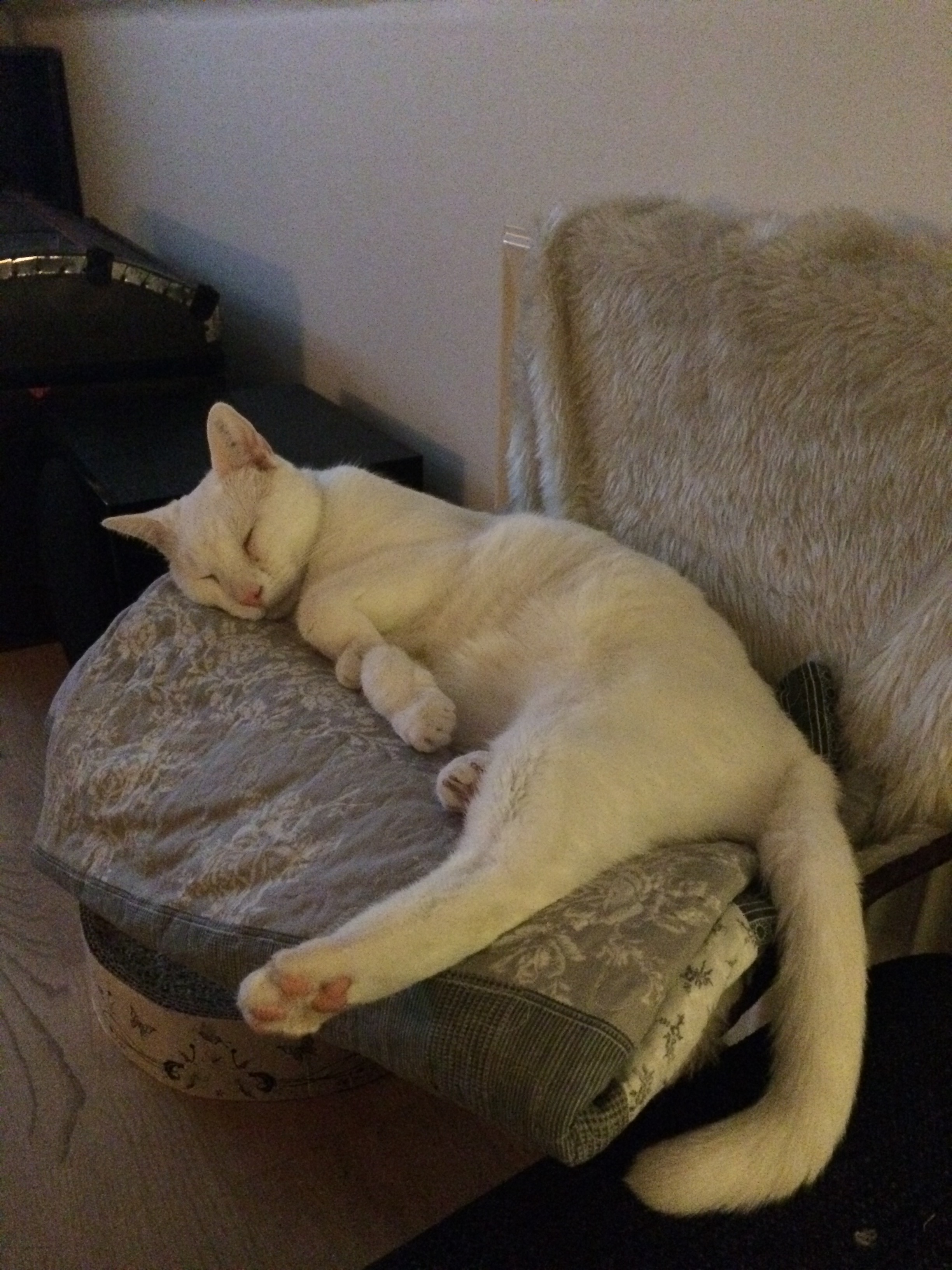 The following morning both cats had their eyes wide open and had full control of their balance again. Victor's anxiety would usually be better by the next morning, but this time he was still not okay. So he kept going after Ronja. By now she could defend herself and run away. She has several places to go, where she is safe from Victor. When Victor is feeling like this, Ronja is not smart enough to stay away. She acts as always and will walk right up to him or pass him, even though that provokes a reaction during stressful times. So that didn't really help the situation either. I got in between them a few times where he went after me as well. He acts vicious but really he is just anxious. After two long days the worst was over, but this time it lasted a whole week before he completely calmed down again.

So you see why I dread going to the vet with my cats! But like I said in the beginning of this post; I don't want to take the risk of not having them vaccinated and health checked. If they get sick that also means more visits to the vet.

I know what you're thinking

People often suggest to me that the vet comes to our house, so let me save you the trouble. Victor doesn't like strangers. Some days he tolerates visitors better than others, but he does not want to get pet by them. And often even I can't touch him when we have company over. So he won't allow a vet to examine him at our house either and he will just end up feeling unsafe in his own home. Victor isn't particularly scared of getting in the carrier or the car ride either. It's people and their hands that he's afraid of. You can read more of Victors anxiety in this post.

Thanks for reading - please take care of your kitties! 🙂

This weeks scoop! A tool for vet visits

View all posts by: Humom

When piling everything because you got to vacuum,

From this evenings... trip outside. Let's call it